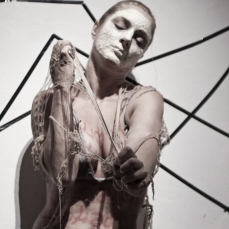 I believe art is the most important tool to develop consciousness and awareness, both for our individual being and body, as we well as for the united human organism and its body: planet earth.

As such, art should reflect on – and interact with – the time and space of its creation.

In times of destructive materialism and needless production, the plain process is the centre of my work.

Questioning things is my main artistic practise, avoiding the activist’s trap of knowing how things have to change while simplifying separations into target and victim, abused and suppressor, black and white, really only deepen each other’s misunderstanding.

I try to create a situation that could transform myself and transcend into experiences that change my inner being. The process can be called: discovering who we are, in relation to others, our environment and all beings, in relation to time and space.

To me, performance art is all about the inner experience of the artist merging with the energy of the audience. It is important to me to include the reality of the observer, moment, and setting.

Some of my work is site-specific, project-based or durational and finds its audience by coincidence, or later in the form of video-works and movies.

For instance the artistic research project ONEAN(D)OTHER that started in 2008 in West Africa, with the question of what can be communicated artistically, amongst people of different language, religion and social conditioning. With the video material I recorded there, I made the movie DREAMING MALI and with the income from selling the DVDs, I support a project that builds greenhouses in West Africa. I believe in the possibility of a social sculpture.
ONEAN(D)OTHER finds forms to trigger communication with refugees.

I work in performance-cycles, as the friction between the momentary and the continuous fascinates me.

The performance-cycle UNTIL DEATH DO US PART deals with our existential dependencies, questioning what we need for our incorporation here on earth in 7 chapters: nature, heart, water, seeds and eggs, blood, breath, skin and brain. “Brain” is the final chapter, and will bring the cycle to a close after a dozen years this autumn in Berlin with a 42-day performance.

The performance `water´, carried out in 2011 in china, was accompanied by the movie MAO+TAO.

Coming from the theatre, I explore ensemble work in new ways, engaging the audience in co-creative experiences.

The performance-cycle SEVEN SEALS is a journey through 7 spaces. I am fascinated with the similarities of different spiritual and cultural backgrounds. For instance, the importance of the number 7. There is the 7 chakras in ancient vedic philosophy, the 7 valleys in sufism, the 7 days of creation, or the 7 lights of the jewish Menora. SEVEN SEALS is a non-confessional journey through the ideological and spiritual heritage of humankind.

Today we are facing the human struggle with the contradiction between monotheistic belief systems in a world of multiple perspectives. This leads us to a constant separation from the concepts that affect our thinking and experiences in our everyday life, and it leads to a separation of spiritual and profane life.

If there is only one divine truth and l am not part of it, it must be in contradiction to everyday life.

The human struggle of our days is in the end a fight with the contradiction within this paradox:

the abuse of nature, imbalanced social structures, religious and territorial fights all emerge from this  confusion.

The conclusion lays in the experienced `unity of multiple perspectives´ which can never be understood theoretically, as a thought and the subject of a thought is already a duality. It can only be experienced with the sum total of our being: our combined physical, mental and emotional abilities. So I try to trigger a multidimensional, interactive and integrating piece of art, that is,
a unity of artist and audience in a continuous flow.

I did SEVEN SEALS with different artists 7 times in Berlin, now I travel with the 7meter tunnel and the ideas of former participants to do SEVEN SEALS in different places, such as New Zealand, Latvia, Indonesia and Portugal. I am looking for the ideal place and people to do the last 7 performances.

I am making a movie with the video I took during the SEVEN SEALS in New Zealand called:

CREATORS OF A COMING PARADISE. It forms a trilogy with DREAMING MALI and MAO+TAO about the different positions we can take in the contemporary world. We can live in poverty (dreaming mali), industry (mao+tao), and in responsibility (creators).

As I end the performance cycle UNTIL DEATH DO US PART this year, I have already begun a new cycle entitled LETTING GO with the performance V.U.P. (very unimportant person). This cycle deals with the different aspects of dying, releasing, letting go, and with greedy longings for vain gain.

Artistic assistance:
for the Wooster Group New York 1998 during “House/Lights”

Awards:
“best feature film” for DREAMING MALI on the Intercultural Project ONEAN(D)OTHER in Mali 2007/2008
at the Texas black film festival 2010 and nominations at the ÉCU fest Paris and the New Jearsay independent Filmfest